The purpose of the Austrian Ludwig Foundation for Art and Science is to propose, carry out and promote projects in the field of fine arts in Austria and in this way to encourage new developments at the same time.

Preamble of the charter

“The primary task of the Foundation is to continue the cosmopolitan and international work of the collectors Mr. and Mrs. Ludwig from Aachen and to cultivate the expansion of friendly international relationships at a cultural level whilst at the same time adapting to changing times; the aim is not to maintain the Foundation as a monument but instead to pursue activities which have a beneficial influence on current times.“ (Walter Queins, 2012)

Accordingly, national and international works of art of the highest quality have been purchased since the establishment of the Foundation. To date these have been primarily made available to the Museum moderner Kunst Stiftung Ludwig Wien – mumok as permanent loans.

In accordance with its purchasing and funding policy the Austrian Ludwig Foundation primarily purchases works of art for the Austrian federal museums and also for other Austrian public museums and institutions, provided that the purchases are in line with the intention and requirements of the Foundation and enhance the collection of the requesting museum in substantive terms, i.e. also in the sense of an aesthetically complex and socially relevant concept of art. Selection focuses on recent developments in contemporary art.

Bodies of the Foundation

Gottfried Toman
(Chairman of the Management Board)

History of the Foundation

The Austrian Ludwig Foundation for Art and Science was founded in 1981 in connection with the contribution of 128 works of art from Peter and Irene Ludwig’s collection. In turn the Republic of Austria agreed to make an annual payment to the Foundation, initially for 15 years, and subsequently for another 15 years, which enabled the Foundation to also acquire works of art.

Today the majority of the works of art donated is kept in the mumok collection, which has been called “Museum moderner Kunst Stiftung Ludwig Wien” as a token of gratitude since 1991.

In 1977 the Vienna Künstlerhaus displayed a selection of works of contemporary art from Peter and Irene Ludwig’s collection under the title “Art around 1970”. These were primarily works from the fields of American and British Pop Art and of photorealism of the 1960s and 1970s. This was followed by the idea of making part of the collection available to the Republic of Austria on loan to support the development of a modern collection in Austria. On 21 February 1978 a contract was concluded by which Mr. and Mrs. Ludwig agreed to loan approximately 130 works of art to Austria for an initial period of five years. The works were exhibited in the Museum of the 20th Century at Schweizer Garten on the one hand and in the baroque Liechtenstein Palace on the other hand, which had been specifically converted for that purpose. Both institutions then organisationally and conceptually constituted “Museum of Modern Art”.

Eventually the Austrian Ludwig Foundation for Art and Science was founded on 19 January 1981. In addition to the contribution of 128 works of art from the Ludwig Collection, the Foundation also received approximately 20 works of art from an anonymous donor, as well as donations from various artists living in Vienna to mark the occasion. To mark the 10th anniversary another 100 works of art that belonged to Mr. and Mrs. Ludwig were transferred into the possession of the Foundation in 1991.

With the construction of a new building for the mumok in Museumsquartier in 2001 the majority of the works of art that were donated in 1981 and 1991 were brought together in one building. Since the year of foundation the collection has increased to approximately 900 works through annual purchases and the second donation in 1991.

Irene (née Monheim) and Peter Ludwig met while studying art history at the University of Mainz at the end of the 1940s. From 1957 onwards the couple acquired their first few works of art while travelling in the Mediterranean, to North Africa, Mexico and Peru. At the end of the 1970s the rapidly growing collection was both housed in the newly-founded institutions associated with the Ludwig name and integrated into existing collections as permanent loans. 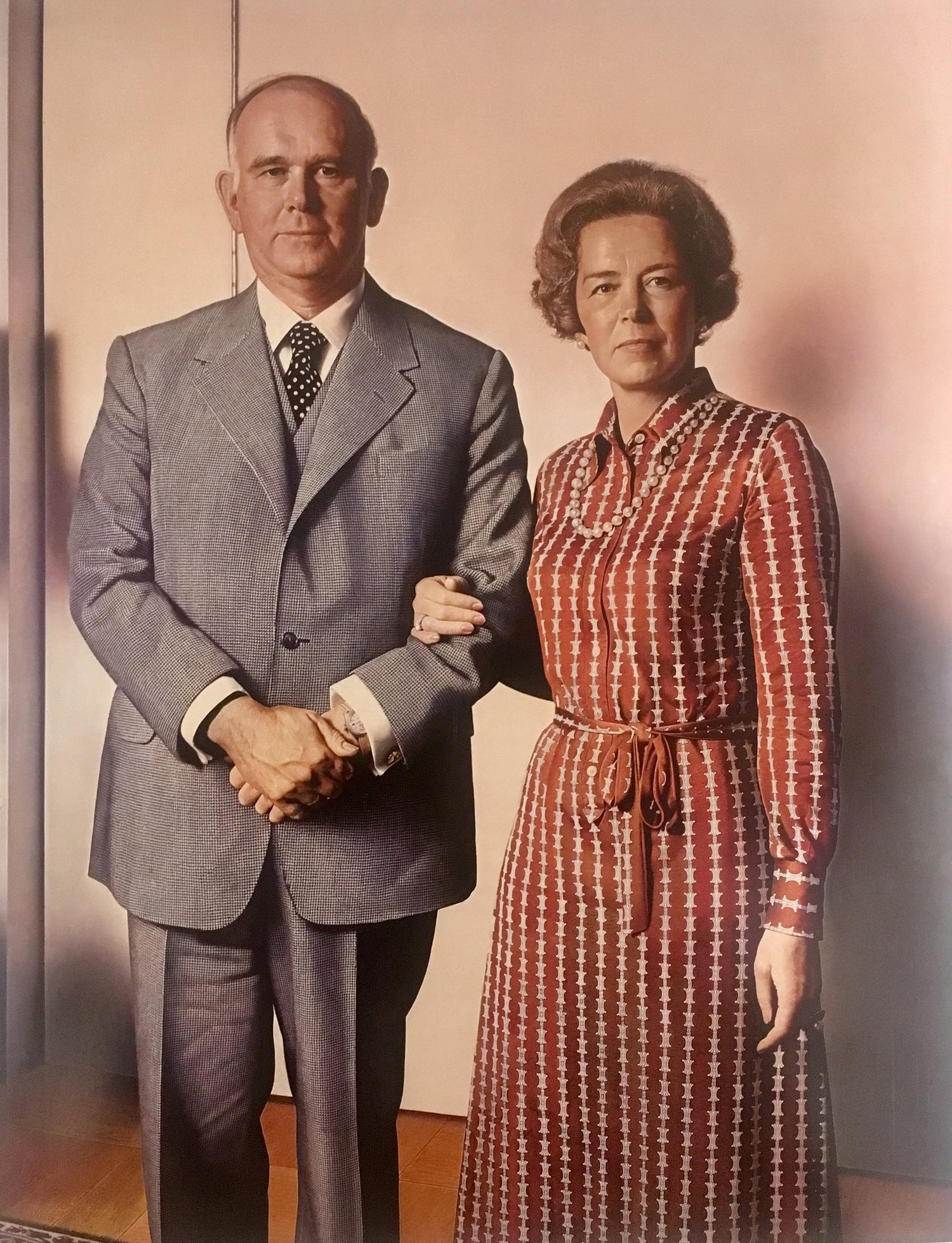 The life of Peter Ludwig

Peter Ludwig (born in Koblenz on 9 July 1925, died in Aachen on 22 July 1996) was a German industrialist, lawyer, art historian and patron of the arts.

Peter Ludwig was the son of lawyer Fritz Ludwig and his wife Helene, née Klöckner, the family who owned the Klöckner Group.

He graduated from the classical Kaiserin-Augusta grammar school in Koblenz in 1943. From 1943 to 45 he did his military service and was taken prisoner of war. From 1945 he studied law in Bonn. In 1946 he changed to the newly-founded Johannes Gutenberg University in Mainz and studied history of art, archaeology, pre-history and ancient history, and philosophy. Start of his collecting activities. In 1950 he attained his PhD with a doctoral thesis entitled “Das Menschenbild Picassos als Ausdruck eines generationsmäßig bedingten Lebensgefühls” [Picasso's picture of mankind as an expression of a generation-based attitude towards life].

He married Irene Monheim in 1951. From 1952 he worked in the family-owned company Leonard Monheim Schokoladenfabrik (including as managing shareholder and chairman of the supervisory board), as well as in other German groups of companies. In 1986 he founded Ludwig Schokolade GmbH.

From 1956 he was a member of the bodies of various museums and cultural institutions: Cologne: Rautenstrauch-Joest-Museum, Schnütgen-Museum, Wallraf-Richartz-Museum / Dusseldorf: Kunstsammlung Nordrhein-Westfalen / Bonn: Deutsch-Französische Kulturstiftung / New York: Museum of Modern Art. Publisher of the Aachener Kunstblätter.

International honours and awards (selection):
1972: Honorary Professor for Contemporary Art at Cologne University, 1975: Golden Ring of the City of Aachen, 1976: Great Cross of Merit of the Distinguished Service Order of the Federal Republic of Germany, 1977: “Chevalier de la Légion d'Honneur”, 1981: Great Golden Cross of Merit with Star of the Republic of Austria, 1989: Ring of Honour of the City of Vienna.

The life of Irene Ludwig

Irene Maria Therese Ludwig, née Monheim, was the daughter of Aachen-based entrepreneur Franz Monheim and his wife Olga Ella and the great-granddaughter of Leonard Monheim, founder of the Trumpf Chocolate Factory.

She graduated from grammar school in Aachen in 1946. She studied history of art, archaeology, pre-history and ancient history at Johannes Gutenberg University in Mainz from 1947 to 1950. Her interest in arts and culture had already begun to develop during her childhood. She began collecting while she was studying in Mainz.

She married Peter Ludwig in 1951. From 1957 she collaborated with museums in Cologne and Aachen. She was a member of various bodies of museums.

The mumok in Vienna bears the Ludwig name: Museum moderner Kunst Stiftung Ludwig Wien. There are 28 public institutions worldwide that are connected to the Ludwig name.